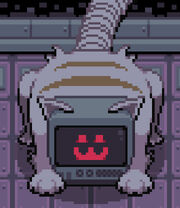 Archangel Catsiel is a boss in Lenna's Inception, found in the dungeon where the player obtains the Spring Shoes.

Catsiel is a large tabby cat with a mechanical tail and a television screen as a face.

Catsiel begins combat with a swipe of their tail, stabbing a point on the far side of the battlefield. This is not a powerfully damaging attack, but difficult to avoid if the player is not constantly moving.

After that, Catsiel will leap into the air, coming back down with earth shaking force that with stun both them and the player in the process. The player must time their jump with the Spring Shoes properly to avoid being stunned. While stunned, Catsiel's TV screen disappears, revealing a normal cat's head which is vulnerable to attack.